September 16, 2014 by Marie filed under Journey

Josh and I bought our very first RV last week, and as promised, here's the scoop!

If you've been reading our blog, you'll know that we had been considering class A diesel motorhomes. If you haven't been reading, here's the place to learn about why we're making the decision to become digital nomads. 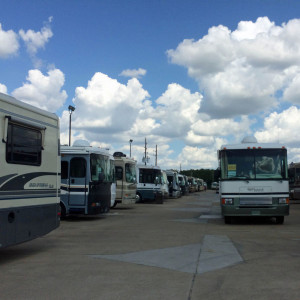 So you may be a little surprised to learn we settled on a fifth wheel. 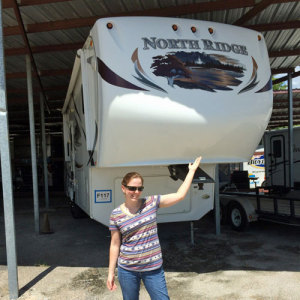 Here's Why We Bought a Fifth Wheel

There were several contributing factors to this decision.

Keep in mind we're total RV newbies, having never driven in or even slept in one before (or still!), so our decision was based on lots of research and stories from other full-timers.

This list doesn't mean we think fifth wheels are better. For some folks, motorhomes are perfect.

Ultimately, I think we'd enjoy living in a motorhome just as much as a fifth wheel, so long as the floorplan fit our needs. We're mostly just excited about the adventures we'll have.

So with no further ado, on to the photo tour! 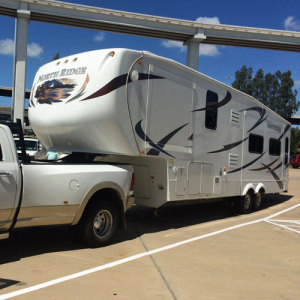 On the inside, there's a petite kitchen with a gas stove and oven, a convection microwave, a double sink and a decent amount of counter space. 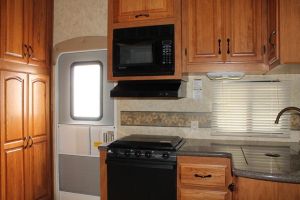 Across from the kitchen is an expandable table with dining and a loveseat sleeper sofa. Full disclosure: we're most likely getting rid of both of these. More on updates as they occur! 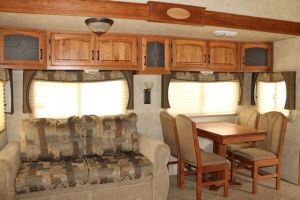 Did I mention it has a ceiling fan? I'm really excited about that.

I'm also excited about the fact that it has a ready-made kitty litter box area under the fridge. See the tiny door? 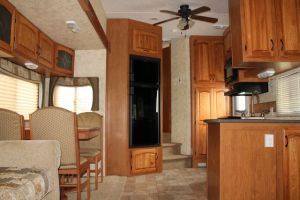 A look back at the kitchen

The living area is totally cozy, with the loveseat, two recliners, a desk, tv and electric fireplace. Truth be told, we're probably also getting rid of the recliners in favor of a second desk for Josh. 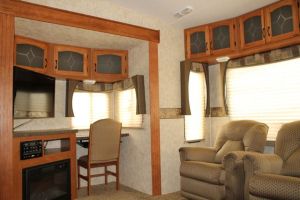 Future blog posts will come from this desk!

Having two slide outs across from each other makes for a really expansive living space. This is one of the reasons we fell in love with this RV. 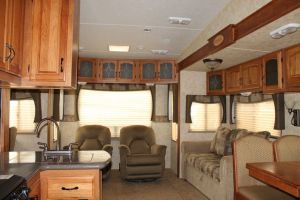 View of the living area from the kitchen

The bathroom is enclosed, rather than being a part of the bedroom — something we like a lot for when we have guests. Across from the bathroom is a linen closet. 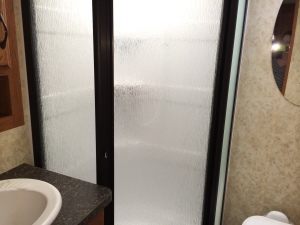 The bedroom has a spacious wall closet, an all-in-one washer/dryer unit, a chest of drawers and a corner cabinet. Also way too many mirrors. 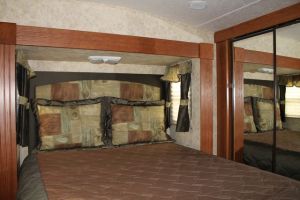 A place for sweet dreams

We have a fair number of changes we're planning on making, and we'll keep you posted as we transform our new home with our own style. In the meantime, she's just hanging out in a storage facility until we get a truck to tow her on her first adventure!

What are your thoughts on Class As versus Fifth Wheels? Do you think we made the right choice? Don't hold back!

What's in Our RV Kitchen Cabinets?