July 25, 2016 by Marie filed under Informational

Even if your reason for going into the wilderness to disconnect, it's not a bad idea to bring a smartphone with you.

Navigation, geocaching, plant/bird identification, and making emergency calls can drain a battery in a hurry, so if you've been considering a compact solar charger with a battery to top off your electronics on the trail, check out the SunJack 14W+8000mAh Battery.

What it Is and How to Set it Up

The SunJack 14W+800mAh Battery is a rugged solar and battery solution that is perfect for campers, hikers, vacationers, RVers -- anyone. It's also a nice addition to an emergency kit if you live in a storm-prone area. 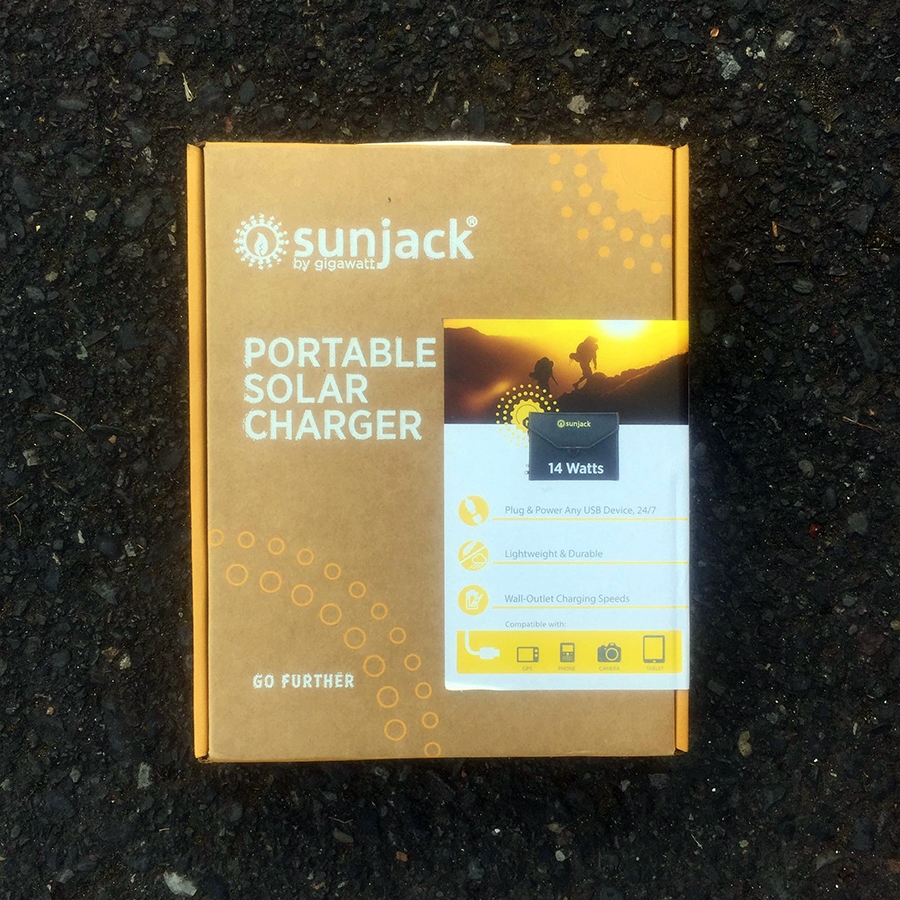 The SunJack still in its package

The SunJack has 4 solar panels, which fold out from the durable case. It's super easy to set up. Just flip, flip, flip, and it's ready to charge. 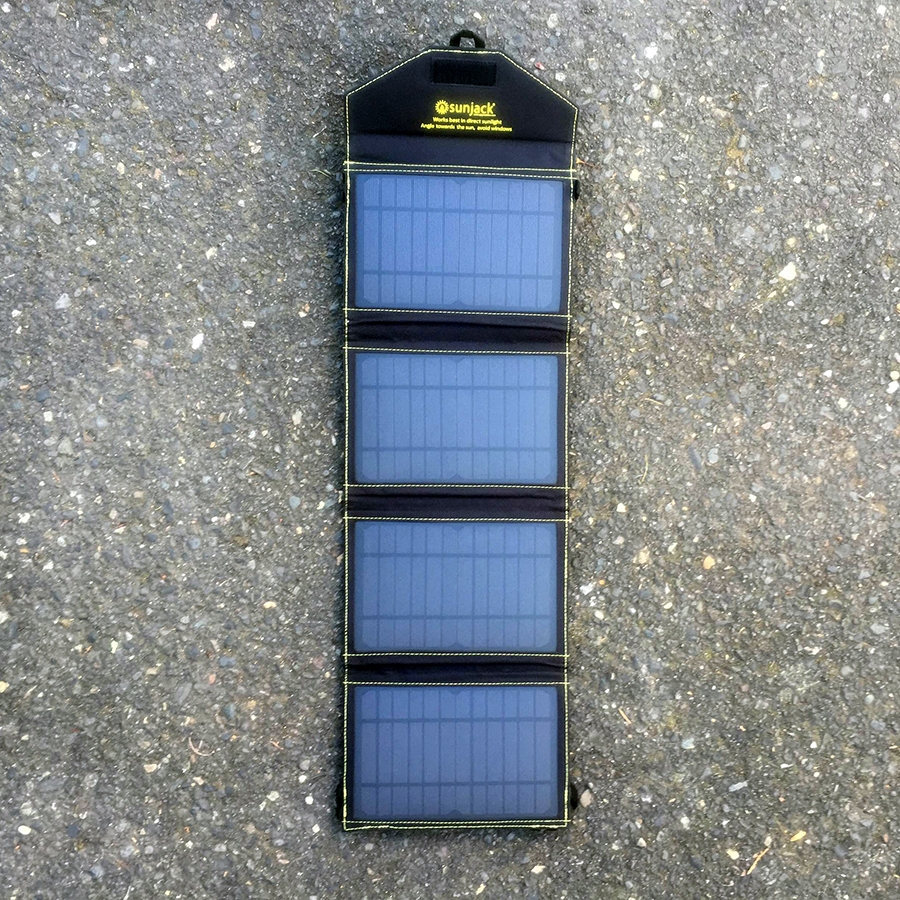 A mesh pocket on the back of the panels keeps the charger, battery, USB battery charging cable and 2 caribeners nice and tidy.

To finalize the setup, just plug up the charger to the battery. (This is optional, as you can directly charge electronics from the 2 USB outlets on the charger.) 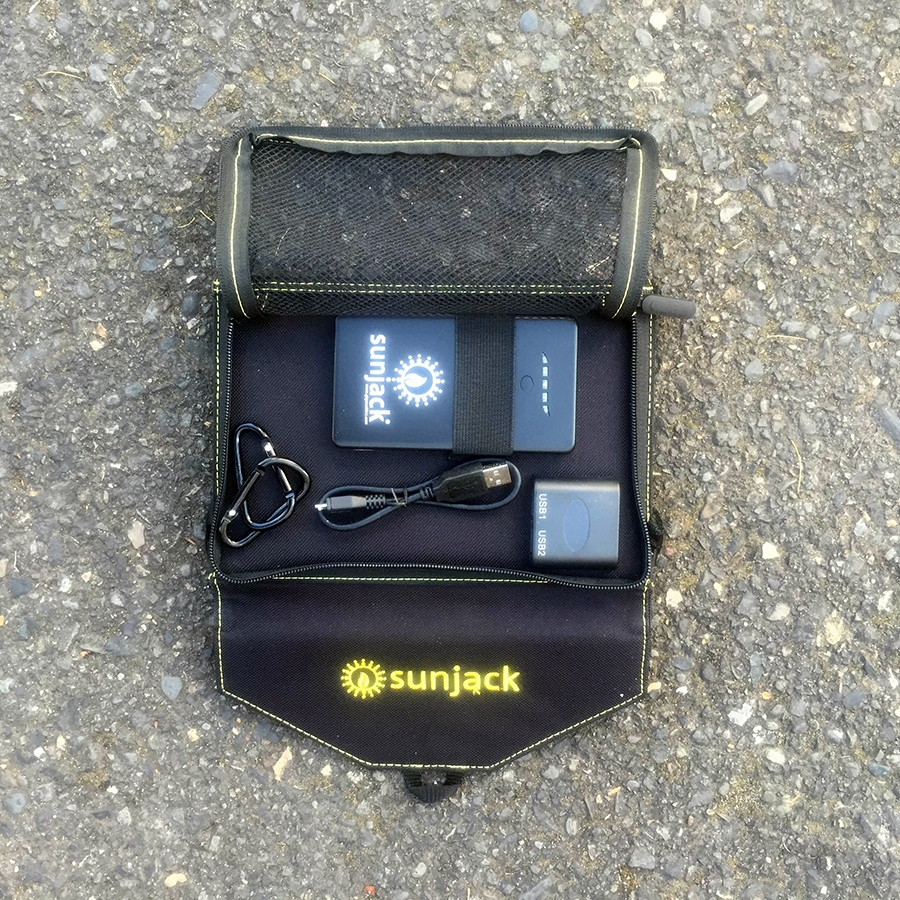 The SunJack's back mesh pocket

Although the SunJack's battery comes fully charged, when it's time to give it a boost, find some good, direct sunlight. Avoid "shading" (covering any of the panels' cells with shadows), as this drastically reduces the energy production for the entire panel.

Set it down flat with the panels facing upwards, or tilt it at an angle. It can catch rays through a window or a windshield, but this will also limit energy production. 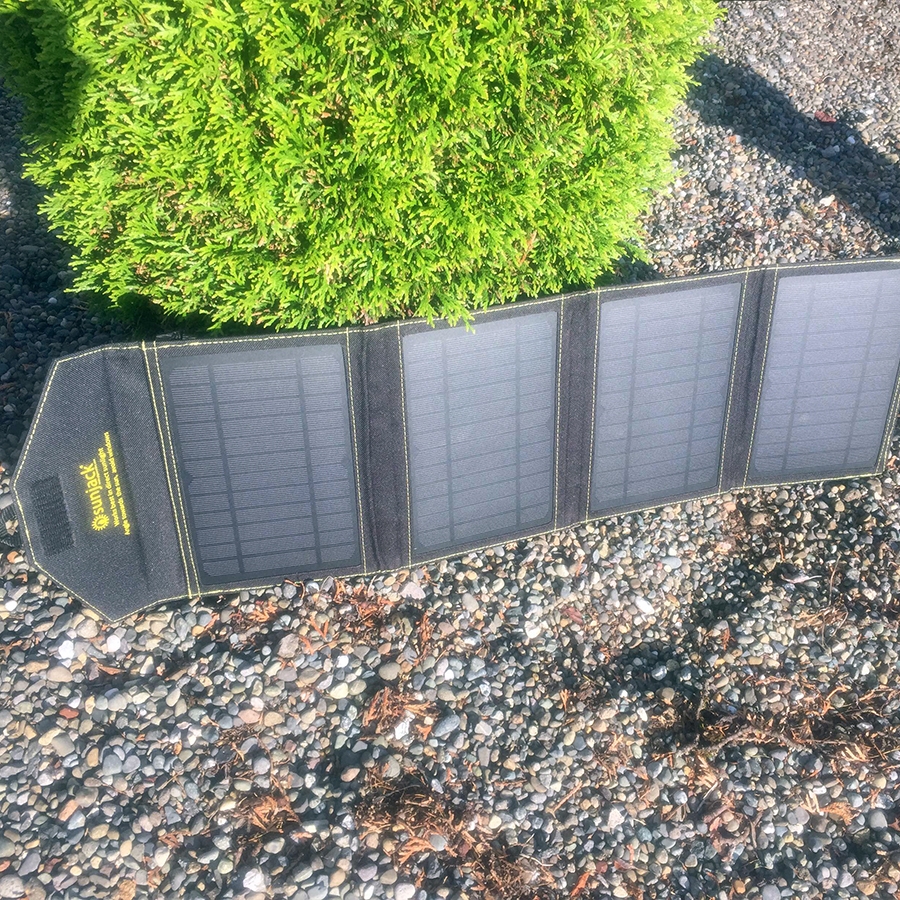 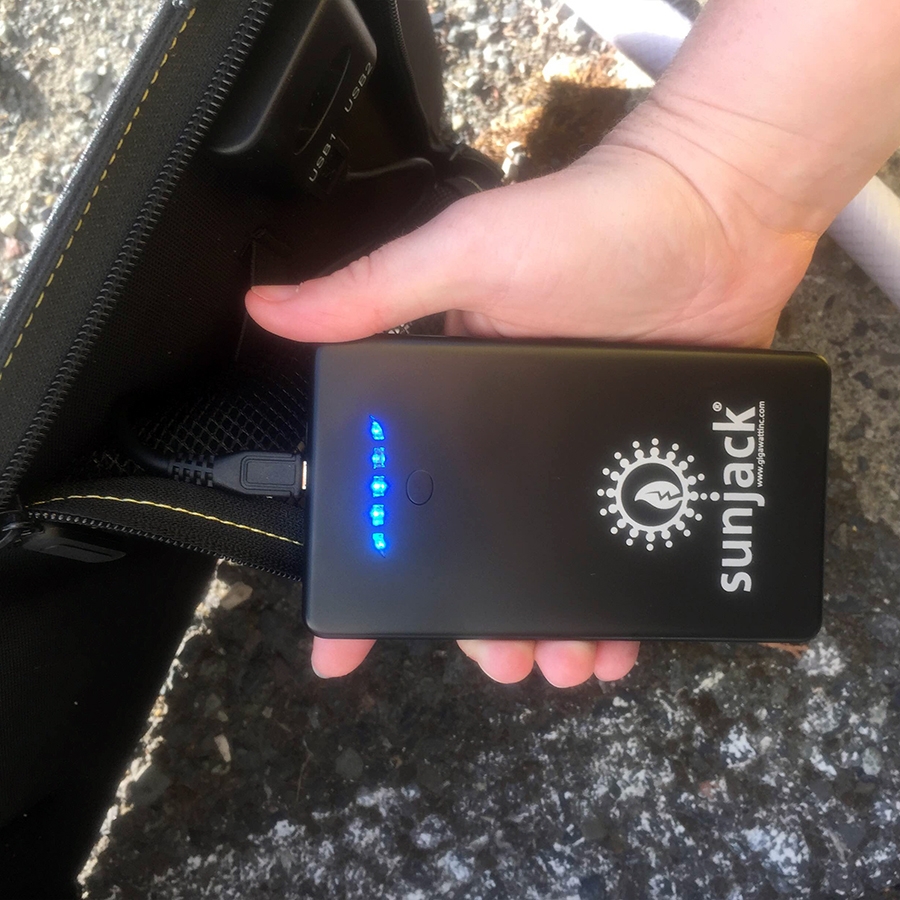 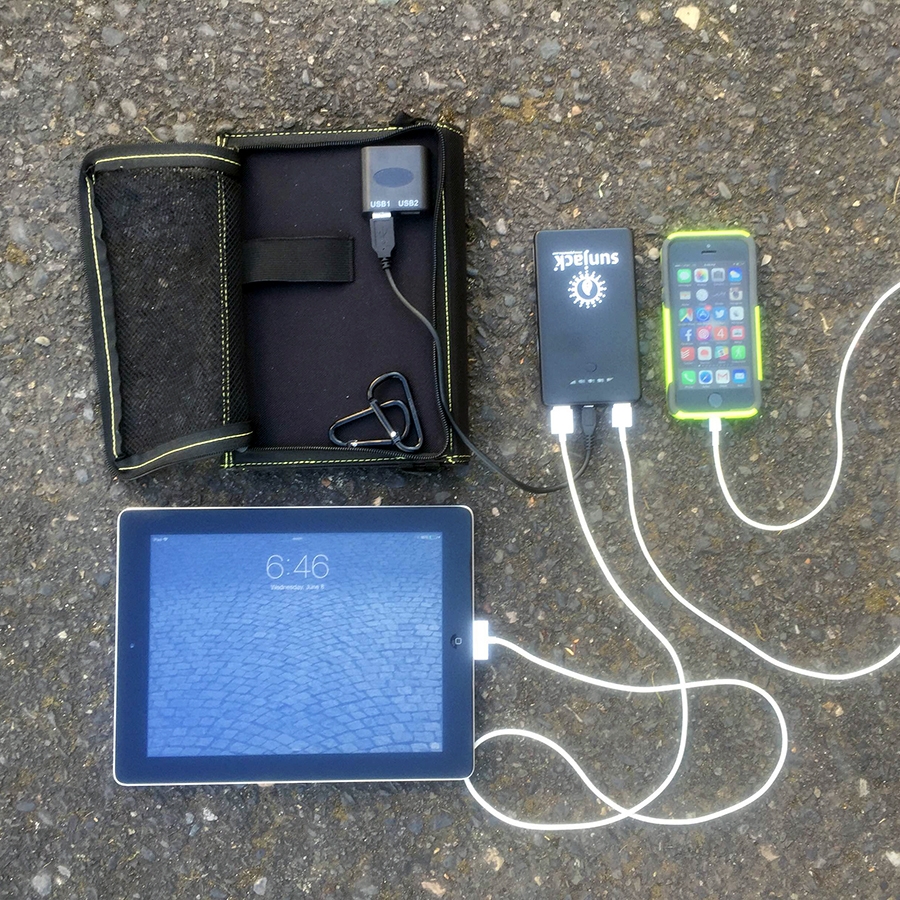 SunJack charging a smartphone and tablet

It takes 5 hours of direct sunlight to charge the battery fully. According to SunJack, the battery is able to charge 1 tablet or 4 smartphones on one charge. The time to charge up a smartphone is 90 minutes (that's about the same amount of time as it would take from a wall outlet!). 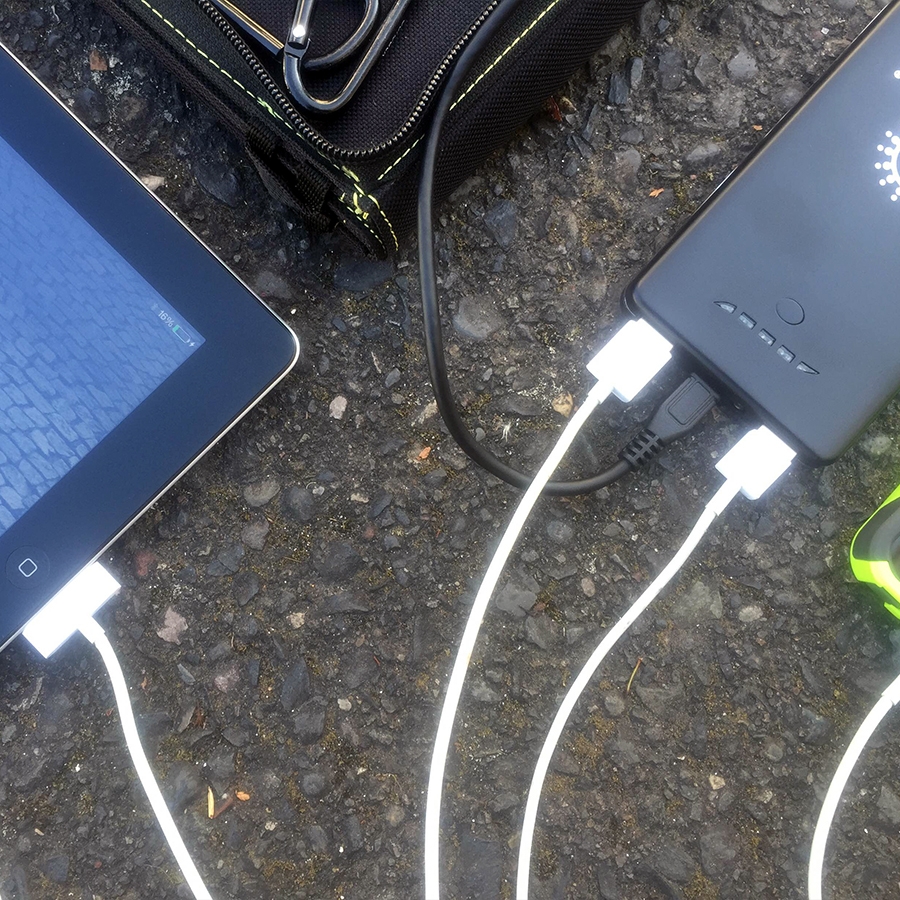 But wait: there's more! I love the extra little feature of a built-in flashlight on the battery. Simply press and hold the power button, and the low-power LED beam comes to life. 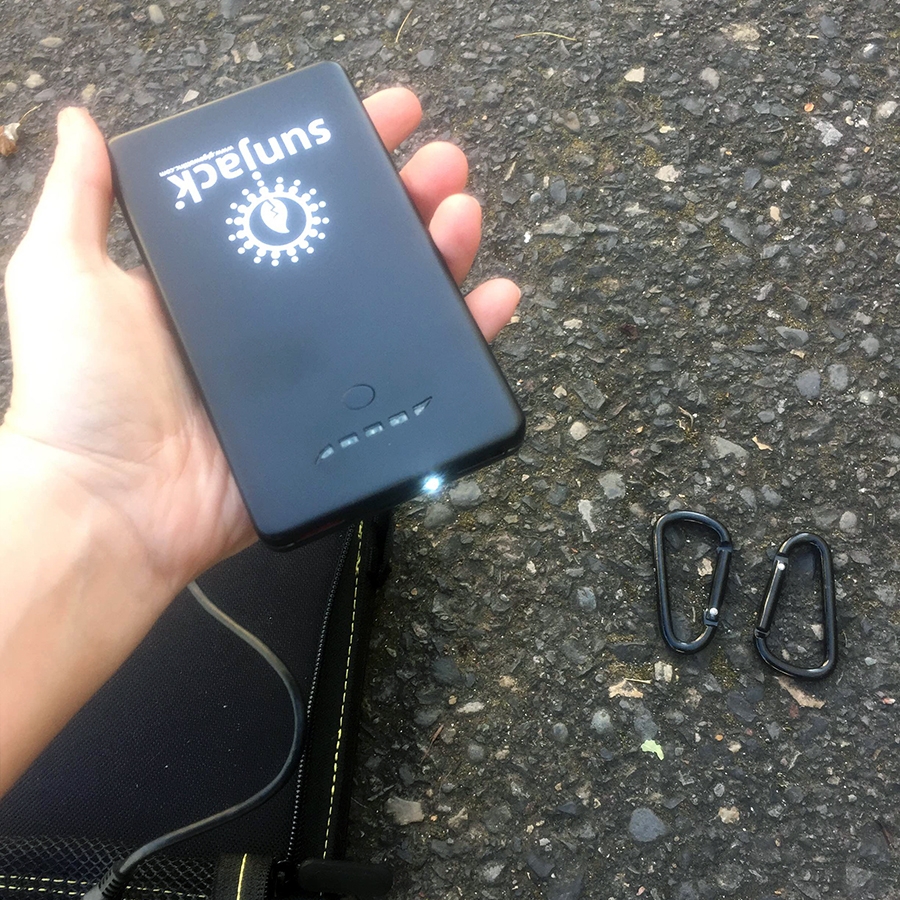 How it Performs in the Field

I took the SunJack camping to test it out. After getting my iPhone down to 9% battery life, I plugged it in to a fully-charged SunJack and started the stopwatch.

In 95 minutes, the phone was back up to 100% battery life. The SunJack's battery pack, which was not receiving any sun during the charging process, showed 2 out of 4 LEDs by the end.

I recharged the battery using the solar panels, a process that took a couple of hours, as it was already at 50%. Then I plugged in my tablet. It made it from 2% up to 40% before I maxed out the battery.

With a one-year manufacturer warranty, and arriving on your doorstep fully charged, the SunJack is ready to hit the trail the moment you get it. As of July, 2016, it sells for $150.

Bottom Line: The SunJack 14W+8000mAh Battery is a solid solar kit. It's well-suited for rugged environments and performed great in the field. It has a streamlined, easy-to-understand setup, and it has everything you need to gain energy independence anywhere. Impressively, it's possible to get a full battery charge from the solar charger even on a short or cloudy day. Be aware the battery capacity might be overstated when it comes to your device, but if you're going into it with eyes open, we definitely recommend it!

Have you used a solar kit like SunJack's? How has it given you more freedom on your adventures?

Disclosure of Material Connection: We received the SunJack 14W+8000mAh Battery for free from Sunjack as coordinated by Outdoor PR in consideration for review publication. Our opinion is 100% our own.